Have you ever heard a salesperson boast that if they can just get face-to-face with a prospect, their odds of winning the deal jump to 50%?

Of course, you have. Pretty much all salespeople make this claim!

If we analyze this statement, we discover that it contains an observation that is (most likely) roughly correct. And an assumption that is wildly wrong.

What’s most concerning is that this seemingly harmless assumption causes salespeople and management to make decisions that do serious harm to the performance of their sales functions.

I would go so far as to suggest that you have made this mistake yourself. I certainly have!

The observation in the salesperson’s statement, which is most likely correct, is that their odds of winning a deal are 50%, after a face-to-face appointment.

This estimate seems a little aggressive for most direct sales environments but it’s within the realms of possibility.

The fallacious assumption is illustrated by the salesperson’s inference that getting face-to-face caused the odds of winning the deal to jump to 50%.

It’s easy to see why a salesperson might like to think that that is the case. But it also doesn’t take too much effort to discredit this assumption.

We all learned in high school that correlation does not imply causation.

If two events are correlated, we should be careful not to jump to the conclusion that a causes b. It might be that b causes a. Or that a and b are both caused by c. Or that the correlation is entirely coincidental.

So, let’s test the salesperson’s causal claim against these possibilities to see which we think is the most probable.

Given that pretty much all salespeople observe the correlation between face-to-face meetings and an elevated likelihood of a win, I think we can assume that there’s more at play here than coincidence.

So, the next test should be to question if b might be causing a. In other words, is it possible that prospects agree to meetings with salespeople only when they have pretty much made up their minds to purchase?

As soon as we pose that question it becomes obvious that this is the more likely explanation of the correlation our salesperson is reporting.

And if we consider the dynamics of opportunities in direct sales environments, this explanation becomes even more convincing.

(That is to say that we’re to concern ourselves with environments where salespeople sell proactively—so we’re excluding environments like retail and online commerce.)

Turns out that, in direct sales environments, there’s a function that predicts the probability of a win at different stages of an opportunity with remarkable accuracy.

I’ve charted the function for you here. 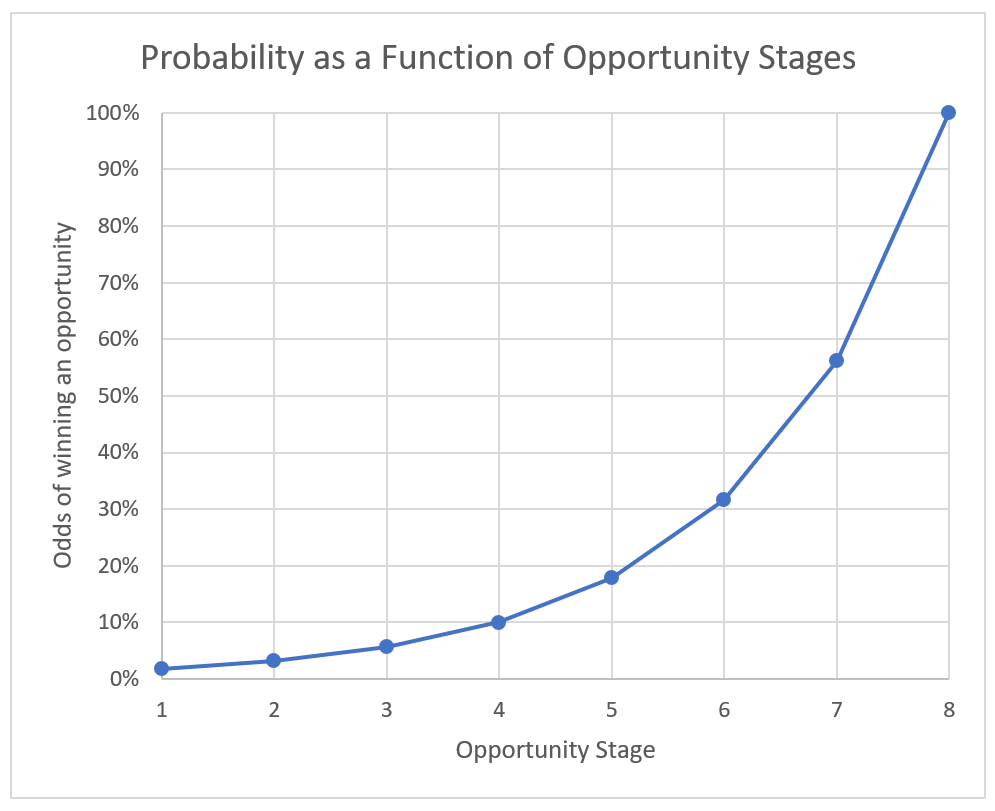 The shape of this curve is roughly the same in all direct sales environments, irrespective of which stages contain face-to-face meetings.

But, it gets better!

This forces us to conclude that getting face-to-face does not actually exert a meaningful change in the odds of a win.

In other words, if it’s critical that your salesperson gets face-to-face in order to continue the sales conversation, they should probably do so. But they should not kid themselves that, by getting face-to-face, they were able to cause a magical escalation in the odds of them ultimately booking a win!

The cost of careless reasoning

Because salespeople (and their managers) draw the hasty conclusion that face-to-face meetings cause the odds of a win to jump to 50% (or some similar number), what you tend to find is that salespeople attempt to get face-to-face as early as possible in their engagement with prospects.

This causes them to squander early-stage selling conversations that prospects would be happy to have on the phone, in a rush to get face to face.

The result is that salespeople quickly abandon those prospects who need some convincing, in favor of those who have pretty much already made up their minds to purchase.

And obviously, all else being equal, salespeople should try and stay inside, because they can perform five-to-ten-times the volume of selling conversations on the phone than they can in the field!

The assumption that face-to-face meetings cause a dramatic escalation in the odds of winning a deal is common and appealing. But it’s wrong.

In most sales environments, this careless assumption has very expensive consequences!